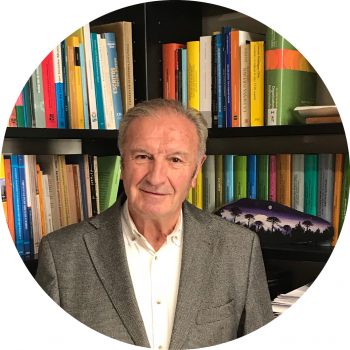 Sociology Research Professor at the Spanish National Research Council (1990 – current, Ad Honorem since 2016), at the Institute for Advanced Social Studies in Córdoba, which he founded and directed from 1991–2009. He was Lecturer in Rural Sociology at the University of Córdoba, 1980-1989, Lecturer at the Faculty of Sociology at the Complutense University of Madrid, Researcher at the Institute for Agrosocial Studies, 1970-1972. At the start of his professional career, he worked as sociologist in the Human Resources Department at IBM Spain, 1972-1975.

He was educated in Spain at the Polytechnic and Complutense Universities of Madrid between 1976-79 and received a grant from the Juan March Foundation to further his studies in Sociology in the UK at the University of Lancaster and Brunel University, London. His research areas include: sociology of science and technology; sociology of politics and welfare; rural and development sociology (poverty, immigration, quality of life…); corporatist theory of modern democratic societies; public opinion and democracy, with special emphasis on Andalusia. The findings of his investigations have been published in 29 books authored or edited by him, 57 chapters in joint publications, 39 articles published in national and international scientific journals and 50 monographs and technical reports containing results of applied study projects and dossiers on cooperation projects.

Within the scope of his research interests he has directed 8 competitive research projects and has participated as a researcher in a further 11. He has also directed 35 applied investigation contracts financed by various public and private organisms. He has also held posts of responsibility in activities relating to research management: Chair and Member of the Social Sciences Panel of the National Agency for Assessment and Forecasting (ANEP), 1990-92; Member and Executive Adviser to the President of the National Research Council (CSIC), 1991 – 96; Chair and Member of the Committee for Social Sciences of the Spanish National Commission for Research Evaluation (CNEAI), 1995-97; representative of the Spanish National Research Council in the Social Sciences Committee of the European Science Foundation, 1994-97; Member of the Social, Economic and Juridical Sciences Panel of the Andalusian Research Plan, 2000-2005.

He has been invited as an expert on cooperation missions to the Dominican Republic, Costa Rica, Bolivia, Ecuador, Peru, Romania and Egypt. Other activities: Spokesperson of the Regional Government of Andalusia, 2009/2010; Adviser to the Minister for Social Affairs, 1982-1986; Member of the Expert Committee of the Economic Development Plan for Andalusia, 1993-96; Co-ordinator of the Work Group “Andalusia, an Inclusive Society” within the “Andalusia, a New Century” project, 1998-99; Member of the Consulting Committee of the “Second Modernisation for Andalusia” project, 2001-2004; Member of the Trust of the Andalusian Studies Centre Foundation, 2005- present; speaker and lecturer at Spanish and international universities (Barcelona, Complutense of Madrid, Salamanca, Sevilla, Granada, Menéndez Pelayo, London South Bank, Roskilde, Augsburg, Louvain…). Director of the Revista Interancional de Sociologia (RIS in its Spanish acronym) from 1991-2002 and editor until 2005; member of the editorial board of several social science journals (Current Sociology, Sociología Ruralis, Sociología del Trabajo, Revista Española del Tercer Sector…).